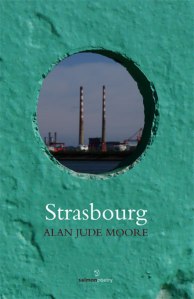 Alan Jude Moore’s third collection, about our cities, states and citizenship; about how we are more united by the expanse of our continent, by common needs and histories, than we are divided by its governments, nations and borders. With the movement of people, information and ideas we evolve, through empires and republics and the rubble they leave behind.

tunnels left to fold themselves
back into the earth

Strasbourg can be ordered directly from Salmon Poetry, from Amazon or local bookstores.